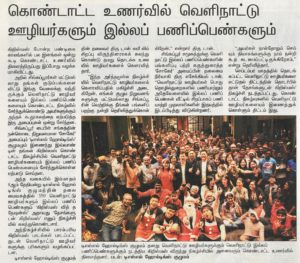 This article was originally posted in our Tamil Murasu.

Widely celebrated festive seasons, such as Christmas, are especially meaningful because they bring families and loved ones together over shared meals and traditions. However, these occasions can often exacerbate feelings of loneliness among vulnerable communities in society, such as the homeless and guest workers, who may not be able to celebrate with their families. Such feelings may also often be more pronounced among guest workers in Singapore, who frequently experience homesickness from having to relocate and live in an unfamiliar environment.

In an effort to alleviate the emotional struggles of these guest workers, SowCare—a charity arm of The Bible Society of Singapore—and TSL Holdings Group worked collaboratively to include guest workers in their Christmas celebrations this year.

Gathering over 350 guest worker employees at TSL Holdings Group, on 8 December at the company headquarters, the ‘Christmas with the Nations’ event sought to appreciate and recognise the efforts of their migrant employees. In the spirit of Christmas, carols were sung and guest worker employees were gifted with presents as well.

Mr Tan Swee Lim, President of TSL Holdings Group, who was present at the event as the Guest of Honour, honoured the workers who were present in his opening address.

“I am very pleased and honoured to host this meaningful event. It is our way of expressing our deepest gratitude to all of you, who have worked hard to contribute to the success of not only my group of companies, but our nation. Your contributions have included laborious work and long hours, and we are truly thankful for the role you have played.”

The ‘Christmas with the Nations’ event follows a series of Feasts of Appreciation (FOA), which were launched by the Alliance of Guest Workers Outreach (AGWO) in September this year. The FOA initiative seeks to invite the local community to tangibly appreciate guest workers here, by hosting celebratory meals for them.

Sharing his vision and ethos behind the FOA movement, Rev Samuel Gift Stephen, Chairman of the AGWO, said, “In a country where food is such an important part of our lives, sharing a meal with these guest workers goes a long way in showing them how we do not consider them to be alien and are truly appreciative for their role in our society.”

Seeking to include FDWs in the leg of celebrations, 300 FDWs have also been invited to attend an upcoming feast at Bible House on 15 December. The FOA for FDWs will also feature performances by various ethnic groups and a mini-bazaar, including photobooth and manicure stations.

Reiterating the role of FDWs in the Singaporean society, Mr Ezekiel Tan, Chief Executive Officer (CEO) of SowCare, shared how, “while guest workers serve in public industrial sectors, the contributions of FDWs are close to home and to the heart. The role they assume is deeply personal and we must remember to remain thankful for the sacrifices they have made and continue to make every day.”

For more information on how individuals or groups can host a FOA, please visit hia.sg/AGWO.