This article was originally posted in our March 2020 Word@Work.

— Advancing the Bible Mission in Mozambique —

“God is able to make all grace abound to you, so that having all sufficiency
in all things at all times, you may abound in every good work.”— 2 Corinthians 9:8

Natural disasters can devastate an entire country in just one day. While Singapore may be blessed to be less susceptible to such unpredictable natural disasters than other countries, the catastrophic consequences of these events are a reality for many others. In fact, each year, over 90,000 people are killed from natural disasters and close to 160 million people are affected—from having their homes destroyed, to contracting infectious diseases.

Just as the Church in Corinth was exhorted to serve communities around them (1 Cor 9:8–11)—being reminded that God had blessed them with abundance, so that having all sufficiency, they may abound in every good work—we also have a part to play in sharing our blessings to aid broken and distraught communities beyond our borders.

The Bible Society of Singapore (BSS) has been providing holistic care to global communities who are in need, such as Egypt, Nepal, Lebanon, Myanmar, Bangladesh, and the Philippines. In 2019, with the generous help of Far East Organization, BSS has additionally pledged USD$20,000 to assist Mozambique in their efforts to rehabilitate the county from the recent devastation of the Tropical Cyclone Idai in East Africa.

Plagued with poverty since its independence in 1975, Mozambique is a country of 29 million people who live between four extremes—namely, drought, floods, poverty, and tropical cyclones. At present, the country is listed as one of the world’s poorest and is among the least progressive in the areas of human development, life expectancy and gender equality—ranking 165 out of 169 on the Human Development Index.

When the team visited Maputo, one of the many areas affected by floods over the past year, food was extremely scarce due to the immense flooding that had swept away homes, crops and livestock. Transportation of food itself was very challenging as most of the roads were impassable. This left the team with no choice but to wade through the water, while carrying food and relief supplies.

Apart from living in volatile conditions with uncertainty about daily necessities, such as food and water, Mozambicans also face high risk of contracting major infectious diseases. These highly contagious diseases, such as malaria and tuberculosis, are easily contractable due to stagnant water sources. Sadly, people who have access to running water constitute only less than half of the entire population. 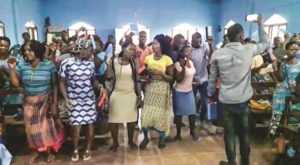 Living in poverty of health, education and spirituality, the people of Mozambique remain in great need of assistance to rebuild their country. The Bible Society of Mozambique has sought help to assist the people and bring back hope to the community. This holistic mission aims to minimise their suffering by meeting their range of needs, such as by providing food and daily necessities, as well as Scripture materials. However, their efforts were hampered when the debilitating Tropical Cyclone Idai hit the country in March 2019—leaving 1,000 people dead and missing, and destroying the Beira Bible Depot and all its Scripture stocks.

Through assistance that has been pledged by BSS towards aiding The Bible Society of Mozambique in Beira, restorative aid has thankfully resumed—meeting basic needs of the Mozambique people, such as food and potable water. 2,500 Bibles were also distributed to 2,500 families from 30 churches.

Rosa Adriano, one of the recipients, exclaimed with joy upon receiving a Bible for her family, “I thank the Bible Society of Mozambique for this holy gift. During the cyclone, I kept asking myself if I would survive. Now, I know why God protected me from the dangers of wind and rain—so that I may spread His Word. My Bible was soaked with water and damaged; I was like a soldier without arms. Now I have received this Bible and it is mine. This will be my weapon to fight against evil. I will go back again to spread the Gospel.”

However, with such great need but lacking resources, much work remains to be done. Sharing about the scarcity of resources, The Bible Society of Mozambique in Beira shared that, “at this stage, we just give one Bible per family as the need is huge. People are asking for personal Bibles. That is, each person would like to have his or her own Bible.” 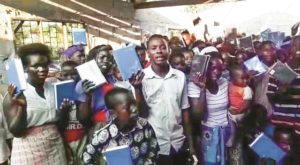 This year, The Bible Society of Singapore will specifically provide targeted relief efforts to the victims of Tropical Cyclone Idai, in central Mozambique, by providing them with new Scriptures and rebuilding the damaged Beira Bible Depot building. This relief initiative would not be possible without the generous giving of our donors. It is our hope that through the provision of humanitarian aid and the Scriptures, the devastated people of Mozambique will be able to regain hope amidst their circumstances.

Let us—who are fully cognisant of the life in His Word—use our overflowing blessings to meet the spiritual and physical needs of people who are suffering. As He has increased providence and blessings towards us, let us increase our standard of giving so that “others may give thanks to God because of us” (2 Cor 9:11). 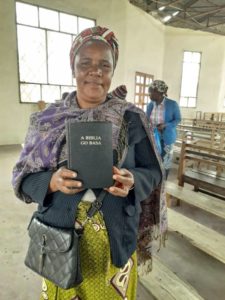