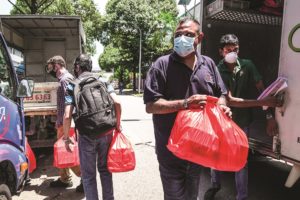 This article was originally posted in our June 2020 Word@Work (COVID-19 Special Edition).

The Bible Society of Singapore (BSS) was formed with the mission of making the Word of God known to all. However, with the rapidly spreading COVID-19 virus resulting in closed borders around the world, BSS’ regional Scripture distribution efforts have faced challenges. While this may be seen as a setback—within our nation itself, there remain nations to be reached. In fact, Singapore has relied on the labour of these nations—through guest workers—from as early as the 1980s. As a result of the COVID-19 situation, these guest workers have become especially vulnerable—being financially affected and faced with worries about their job and future.

In response to this urgent need, SowCare—the charity arm of The Bible Society of Singapore— partnered with the Alliance of Guest Workers Outreach (AGWO)—a movement of Hope Initiative Alliance—to launch the Care Meals Distribution Project on Good Friday, 10 April. Through this project, 9,218 Care Meals were delivered to 113 factory converted dormitories (FCDs).

Due to the overwhelming response to care for the guest workers amid the COVID-19 situation, this project—which was initially organised as a 1-day exercise—eventually evolved into a continuous effort during the entire circuit breaker period, and will be extended until the end of June. 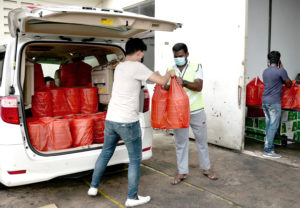 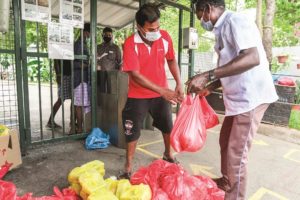 Through the AGWO—a coalition of over 130 partnering charities and organisations—we have been working to meet the needs of vulnerable guest workers by providing them with daily Care Meals for lunch and dinner. Over the course of the circuit breaker period, we distributed more than half a million Care Meals across 267 FCDs and 9 Zones/Collection Points (as of time of writing). The Mustafa Centre was one of the designated daily collection points for guest workers in need of food.

We are thankful to have worked with the Ministry of Manpower (MOM) and the Migrant Workers Centre (MWC), who engaged us to supply food and essentials to the guest workers. Thus, we were able to gain access to these FCDs, while ensuring our distribution efforts were safe. We are also grateful to have been granted the necessary permit to conduct these various efforts with volunteers at our designated locations.

On 18 April, at the request of MOM, we mobilised more than 110 volunteer drivers to send reusable masks to 192 FCDs. The Bible House was designated as the collection point, where safe distancing and contact tracing measures were put in place to ensure the safety of all volunteers.

The High Commission of Sri Lanka also engaged us to supply daily Care. Meals for the stranded low-wage Sri Lankan guest workers in Singapore. We are also grateful for the many dry food and other in-kind donations we received, in support of the initiative and our fundraising efforts.

We also launched the Adopt a Dorm system, which allowed churches and organisations to formally commit to caring for guest workers in FCDs in a sustainable manner.

Given that Ramadan and Vesak Day also fell within the circuit breaker period, we also worked together with AGWO and its partnering organisations, donors and volunteers to care for guest workers commemorating these occasions, by providing them with Festive Care Packs. This project—which supplemented the regular Care Meals distribution—sought to provide 12,000 guest workers with Care Packs across 260 dormitories. The Care Packs included fruits, dried ration items, medical supplies, hygiene products, and a lot more. 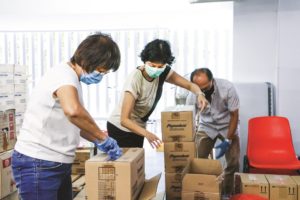 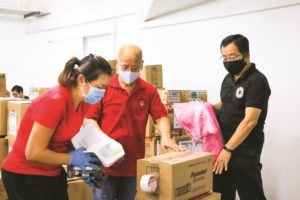 On 5 and 7 May, nearly 300 volunteers—consisting of packers and drivers—came down to the collections points—Bible House at 7 Armenian, as well as Sower Hub at TSL 101—to help distribute the Festive Care Packs nationwide. We were greatly encouraged by the participation of the Speaker of Parliament, Mr Tan Chuan-Jin; MP of Tanjong Pagar GRC, Ms Joan Pereira; Mayor of Central Singapore District, Ms Denise Phua; Chairman of Migrant Workers’ Centre, Mr Yeo Guat Kwang; General Secretary of the Singapore Kindness Movement, Dr William Wan; and Bishop Terry Kee, President of the National Council of Churches of Singapore.

“It is certainly heartening to see Singaporeans coming together to support our guest workers through such community ground-up initiatives. It is my hope that more of us will continue to support such efforts and work together through this trying period.”
—Mr Tan Chuan-Jin, Speaker of Parliament

“The migrant workers are doing their part by heeding the measures of the government. What we can do is come together to make their lives happier by distributing food, hand sanitisers, and medical supplies to them. Everybody is in this together.”
—Ms Joan Pereira, Member of Parliament for Tanjong Pagar GRC

“Our actions will always speak louder than words, and put together— regardless of our language, race or religion, or background—this is the right thing to do. We can only overcome this difficult time if we do it together… taking action, dirtying our hands, giving up money and resources wherever possible, to make things better.”
—Ms Denise Phua, Mayor of Central CDC

“At a point of time when people feel most forgotten and uncared for—is exactly when it is vital that we remind them that we are a community. Only when we are united in our efforts, we can overcome this global pandemic and its repercussions.”
—Rev Ezekiel Tan, Chief Executive Officer of SowCare

“We are glad to have partnered HIA/AGWO, together with several supporting organisations to celebrate Vesak and Ramadan with our migrant brothers and sisters who are residing in the factoryconverted dormitories. Jointly, we have showed care and reminded our migrant friends to continue to practice personal hygiene to protect themselves.”
—Mr Yeo Guat Kwang, Chairman of MWC

“Through our actions, we are loving our neighbours as ourselves. It is also a wonderful opportunity for churches to work together as one, in cooperation with those of other faiths—demonstrating how we can work for the common good of Singapore.”
—Bishop Terry Kee, President of the National Council of Churches of Singapore 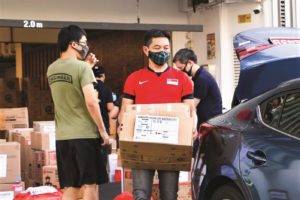 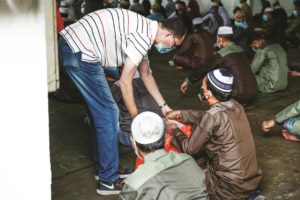 On 23 and 24 May, the initiative also conducted two special deliveries to about 7,000 guest workers from 110 dormitories, in commemoration of Hari Raya Puasa. Other than the regular care meals, both Muslim and non-Muslim guest workers received extra pack of other foodstuffs, enhanced meal—three times the usual value—as well as new sarongs and extra snacks. The Speaker of Parliament, Mr Tan Chuan-Jin joined the distribution efforts, this time as the Guest of Honour.

We are also thankful to the embassies of Sri Lanka, Bangladesh and Saudi Arabia, who also helped raise support and contributed with donation items. It is only through the unwavering support of our various partners, generous sponsors and donors that the aforementioned projects have achieved such resounding success and benefited thousands of guest workers nationwide, and we are deeply grateful to have been used as a channel of blessing.

We appeal to the public to continue supporting our efforts to care for these guest workers, as we continue distribution efforts up until the end of Phase 1. It is our expressed commitment to channel all excess funds into further projects to benefit vulnerable communities, such as guest workers. For more information on past distribution projects and ways to support future initiatives, visit sowcare.sg and hia.sg/guestworkers.

There are many ways you can help sow the Word and be a part of the Bible mission.
Come make a Difference. Join us in the Bible Mission!