Scripture Distribution by Bible Societies in 2018 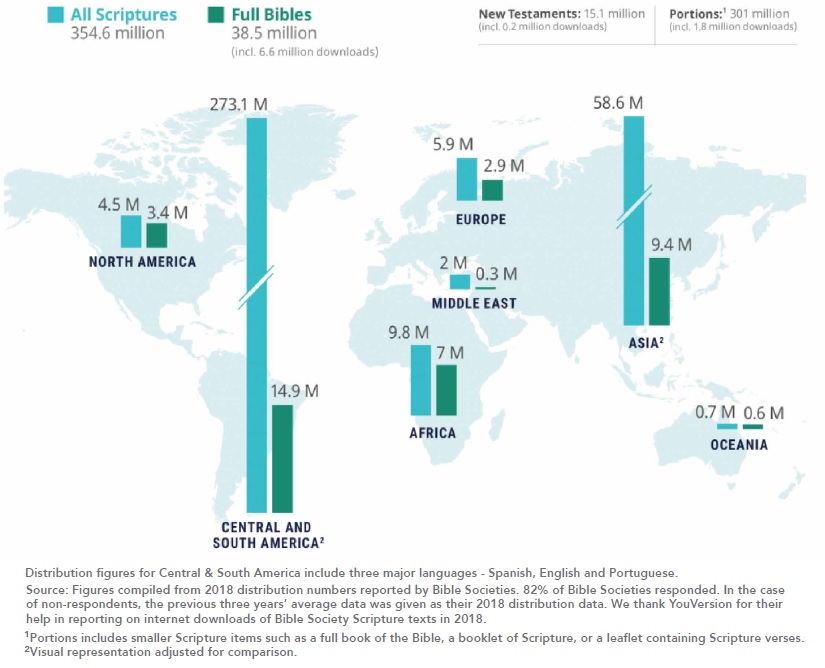 In 2018, for the second year running, Bible Societies distributed more than 38 million full Bibles around the globe.

Annual Bible distribution has been growing steadily since the turn of the decade, reflecting the ongoing demand for Scripture as well as the tremendous commitment of Bible Societies to put God’s Word into the hands of everyone who wants it. Since 2010, United Bible Societies (UBS) has provided more than 305 million full Bibles to the world.

In 2018, 17% of all full Bibles were internet downloads – and for global languages such as Spanish, English and Portuguese, Scripture downloads all topped a million.

More New Testaments were distributed in 2018 than at any other point this decade. Almost 15 million print copies were provided, mostly in Asia where Christianity is considered a minority religion.

All in all, more than 354 million Scripture items, including Bibles, New Testaments, Gospels and smaller Scripture items like booklets for people learning to read, were distributed in 2018. More than 97% were in print format. These figures were compiled from 2018 Scripture distribution numbers reported by Bible Societies, and include local sales and exports of Scripture material.