What Happens When a Village Gets the Bible in its Heart Language?

This article was originally posted by the British and Foreign Bible Society.

Though Christianity had been part of their culture for 100 years, there was no Bible in the Beembe language. It took 20 years of dedicated translation work for them to get a Beembe Bible – but when they did, they showed us how to party…

Imagine fumbling through a dense, tricky text in a second language. You can read it, but it’s hard. You understand in part, but you can't quite capture the meaning. This was the case for the Beembe people of Congo Brazzaville, who only had access to Bibles their second language: French.

‘For me, the problem with the Bible in French was that I had trouble understanding certain concepts and words. So I didn’t read the Bible very often,’ 54-year-old farmer, Pierrette, explains.

Pierrette’s experience isn’t rare. For many people reading the Bible in a second language, the challenge of understanding is significant. But not only that, they’re not experiencing the message of the Bible in the words they can relate to; the words they use in their thoughts, their hearts.

A word in season 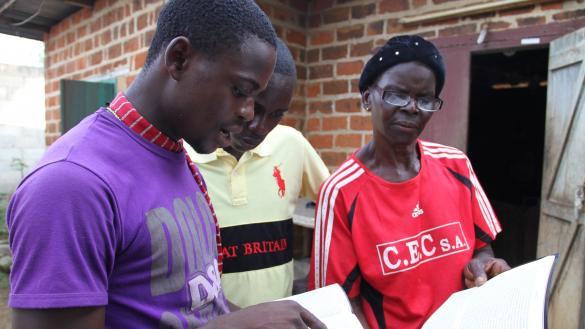 Though Christianity has been part of the Beembe culture for 100 years, this was the first time the community had Scripture in their language. And the joy was palpable.

‘Now we have our own Beembe New Testament, I am very happy,’ Pierrette says.’ It will help us strengthen the faith of our children, who will discover a deeper relationship with God.’

Jacques Mberi is the man behind the Beembe Bible. He has spent decades poring over Hebrew and Greek, considering the best ways to convey the meaning of each verse  – especially when there’s not always a direct translation.

He smiled through tears as he said, ‘I am like Simeon, who waited years and years until he could see the Lord Jesus, and then once he did, he could die. I have worked hard to see this translation finished. It is my child, my pride and joy.’ 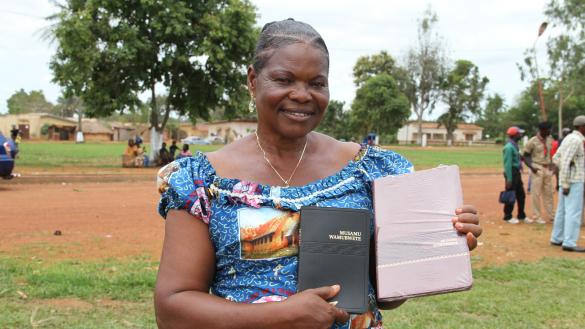 Now the Beembe people have asked to have the Old Testament translated into their language and Jacques is already on the case.

But until then, we’re celebrating that this people group are now experiencing the New Testament in the language they most love and truly understand.

Find out more about funding similar projects around the world

62-year-old Mbambouloulu Evelyne clutched her Beembe New Testament and said, ‘I am delighted with this New Testament. It touches my soul. It allows me to feel closer to God, and I give thanks to God for this precious gift.’

Help others receive the Word in their heart langauage

Life-Changing Impact of the Bible

This article was first published in the December 2013 issue of Word@Work.

Since Rev Dr Robert Morrison’s request for 1,000 Chinese New Testaments to be sent and distributed amongst Singaporeans in 1823, the Bible mission work has continued to impact the lives of Singaporeans who receive and read God’s Word.

When God’s Word is sowed into the hearts of people who need its life-changing power, there is a great harvest.

The gospel is capable of changing even the most hard-core offenders. Here is a testimony of an ex-offender whose life was completely transformed after reading the Bible:

“Years ago, I was involved in a gang clash with two seriously injured and one killed, and was sentenced to prison.

I felt hopeless, suicidal and cried out to idols, but there was no response. I was surrounded by enemies, two of whom became Christians and started reading their Bibles. They stopped smoking and using foul language. I was amazed and wanted to know their Jesus.

I was then transferred to Changi Prison, where one of my cellmates had a Bible. Immediately I asked his permission to read it. After reading Matthew 5:33-37, I was convicted of my sins…I had done nothing good. The Word gave me consolation… I saw Jesus shedding His blood to redeem my life. I prayed to accept Jesus Christ as my Lord and Saviour right away.

I now feel peace and joy flooding my soul, because I have become a child of God.”

The power of God’s Word is able to capture the hearts of those who have turned towards chasing material wealth and idols, as evident in this testimony.

Chua was a success according to material standards, so much that money had become his master. One day, he had a serious motor accident which left him partially paralysed and gave him a bad case of gastric ulcers. This incident caused Chua to start pondering the true meaning of life for the first time, and he began to explore various religions and cults, burning incense and candles to idols for success.

However, the secret of true peace and joy continued to elude Chua, until he was given a Bible by a fellow businessman he met.

In his own words, Chua said, “God had laid it on my heart to read His Word… I met Jesus in the gospel of John. I cried and asked God to forgive my sins…With tears pouring down my cheeks; I came to know the true God. Jesus healed me completely… He healed my nearly paralysed body, my gastric ulcers and helped me forsake my bad habits… Praise the Lord.”

The Bible Society of Singapore (BSS) provides Bibles, New Testaments and Scripture Portions for distribution in Singapore and overseas, and this Bible mission work has been touching and transforming lives of people like Chua and the ex-offender for 190 years. We pray that you will continue to support the work of BSS, so that we can continue to sow God’s Word and make an impact on people’s hearts and lives.

The Bible in Laos: My New Weapon

This article was first published in the March 2013 issue of Word@Work.

In Laos where the purchase of the Bible remains a luxury for the 3.3% Christians, Scriptures are going to those in need – thanks to supporters of Bible Societies.

Life in the landlocked Republic of Laos is basic and under Communist rule. But its Christian population has more than doubled in the last 10 years to more than 200,000.

Thaungxay Sanyahak – a reserved man, expresses joy beyond human understanding in his circumstances as a Christian.

In 1988, Thaungxay married Chanda, a strong believer in Christ. He respected her Christian way of life and became a Christian. But he admits he did not take his new faith to heart.

One day, a significant event caused him to encounter God.

Thaungxay recalled, “My boat capsized on the river during military training. I made it back to the river bank but all my belongings including my gun, machete and identity card disappeared.”

Soldiers who lose their weapons are severely punished, and would lose their jobs. Thaungxay was the sole breadwinner in his family.

He was distressed and confided in Chanda. She called her mother and they prayed.

“I had never really felt God as a tangible presence and found it very difficult to pray. Yet, I prayed with my wife and mother-in-law.”

Three days later, Thaungxay found his belongings lying on the riverbank, in perfect condition. This miracle led him to read his Bible and pray daily.

“The Bible became my new weapon,” Thaungxay exclaimed, believing that God is His protector.

Challenges to his faith

But life is not easy for Thaungxay Sanyahak, a soldier and Christian in Laos.

His family was ostracised in many villages. They finally found a village to settle in, and were encouraged by a visiting pastor. But the pastor’s kindness cost him his life – he was murdered on his way home. The family cried out to the Lord in despair and God sent the village chief who offered them a plot of land to build a house, along with a supportive community who gave them free bamboo for building.

Unfortunately, the house they built was burnt down and they lost all possessions. But the Lord provided a church that contributed money, clothing and other basic necessities.

As a Christian, Thaungxay is unlikely to be promoted in the army and his family members struggle to get by. Not all his children are able to attend school. His 14-year-old son is an ‘A’ student but had to withdraw from the state school as his father could not pay his fees.

Yet, Thaungxay is joyful in giving…

Despite the challenges, his family does not lose heart but is renewed day by day as they put their hope in the Word of God (2 Corinthians 4:16 ESV).

Thaungxay seizes every opportunity to share his faith with others. Besides the two Bibles in the house belonging to his family, there are several New Testaments that he bought to give to friends.