The Word Became Flesh—Sowing Care for the Nations 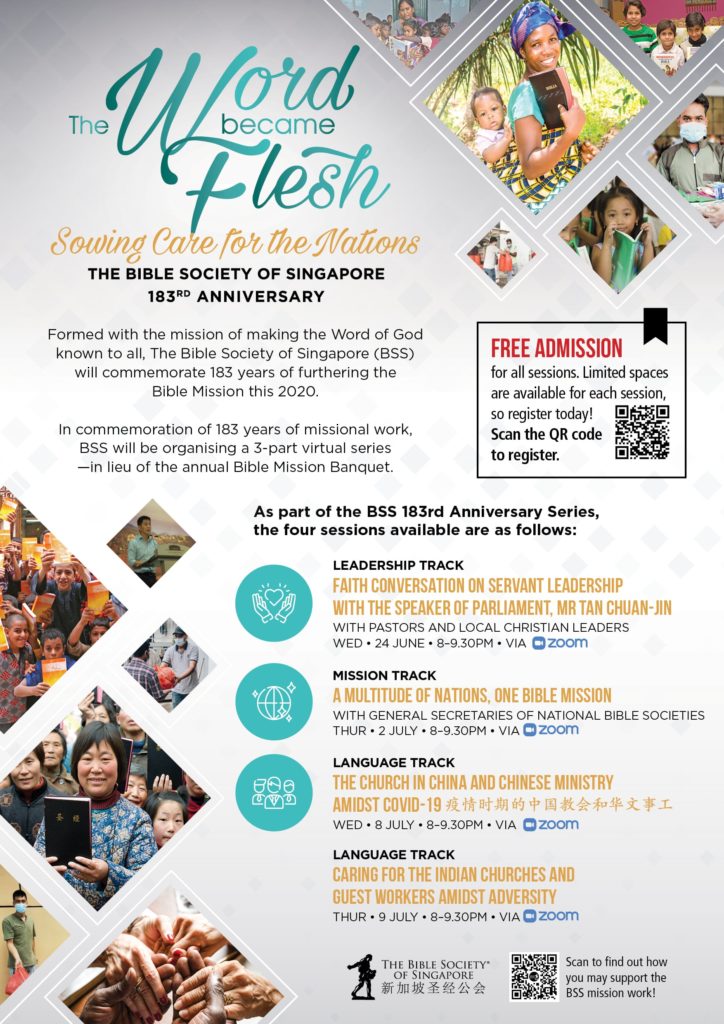 Formed with the mission of making the Word of God known to all, The Bible Society of Singapore (BSS) will commemorate 183 years of furthering the Bible Mission this 2020.

In commemoration of 183 years of missional work, BSS will be organising a 3-part virtual series—in lieu of the annual Bible Mission Banquet.

As part of the BSS 183rd Anniversary Series, the four sessions available are as follows:

The Church in China and Chinese Ministry Amidst COVID-19
疫情时期的中国教会和华文事工 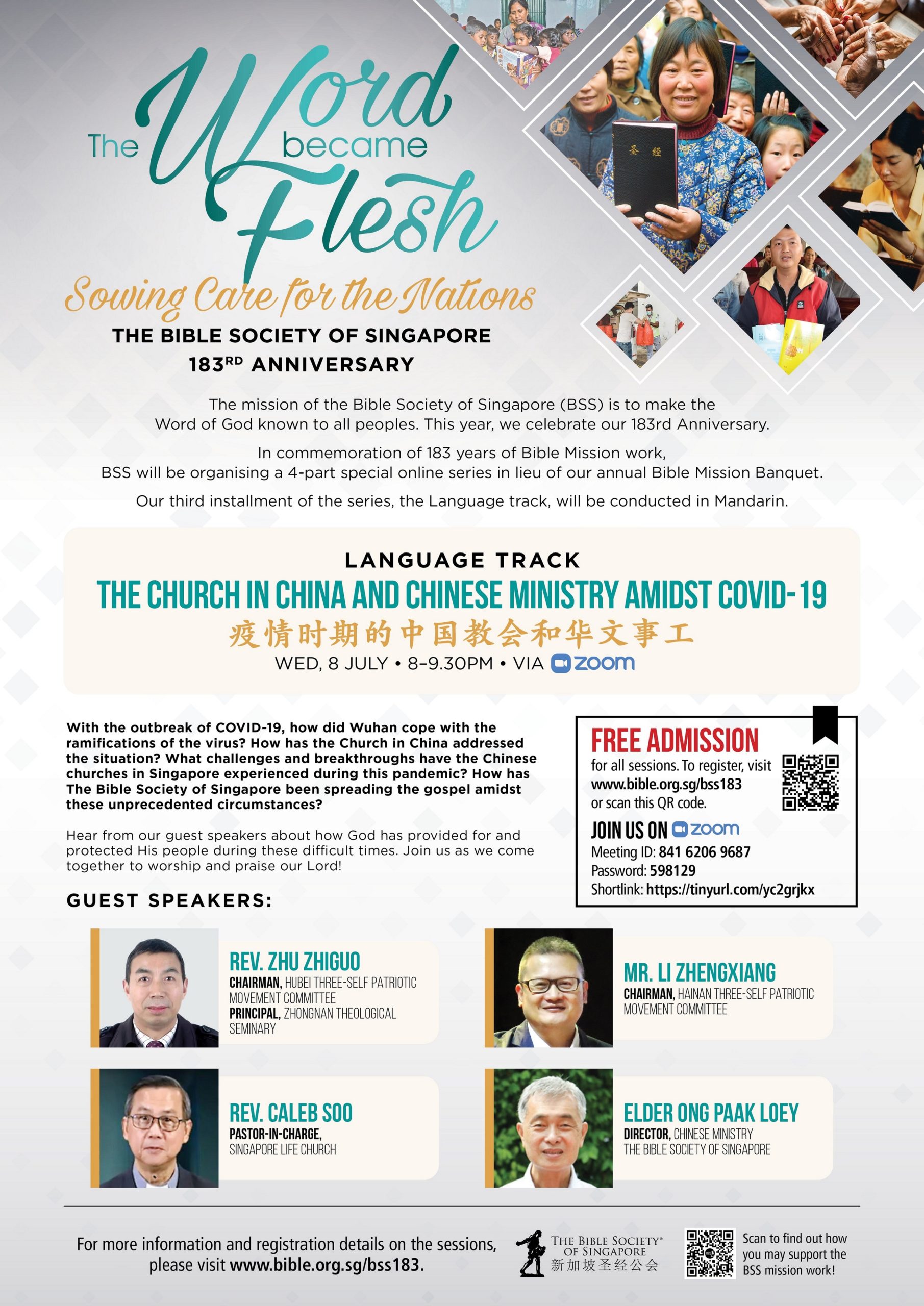 With the outbreak of COVID-19, how did Wuhan cope with the ramifications of the virus? How has the Church in China addressed the situation? What challenges and breakthroughs have the Chinese churches in Singapore experienced during this pandemic? How has The Bible Society of Singapore been spreading the gospel amidst these unprecedented circumstances?
Hear from our guest speakers about how God has provided for and protected His people during these difficult times. 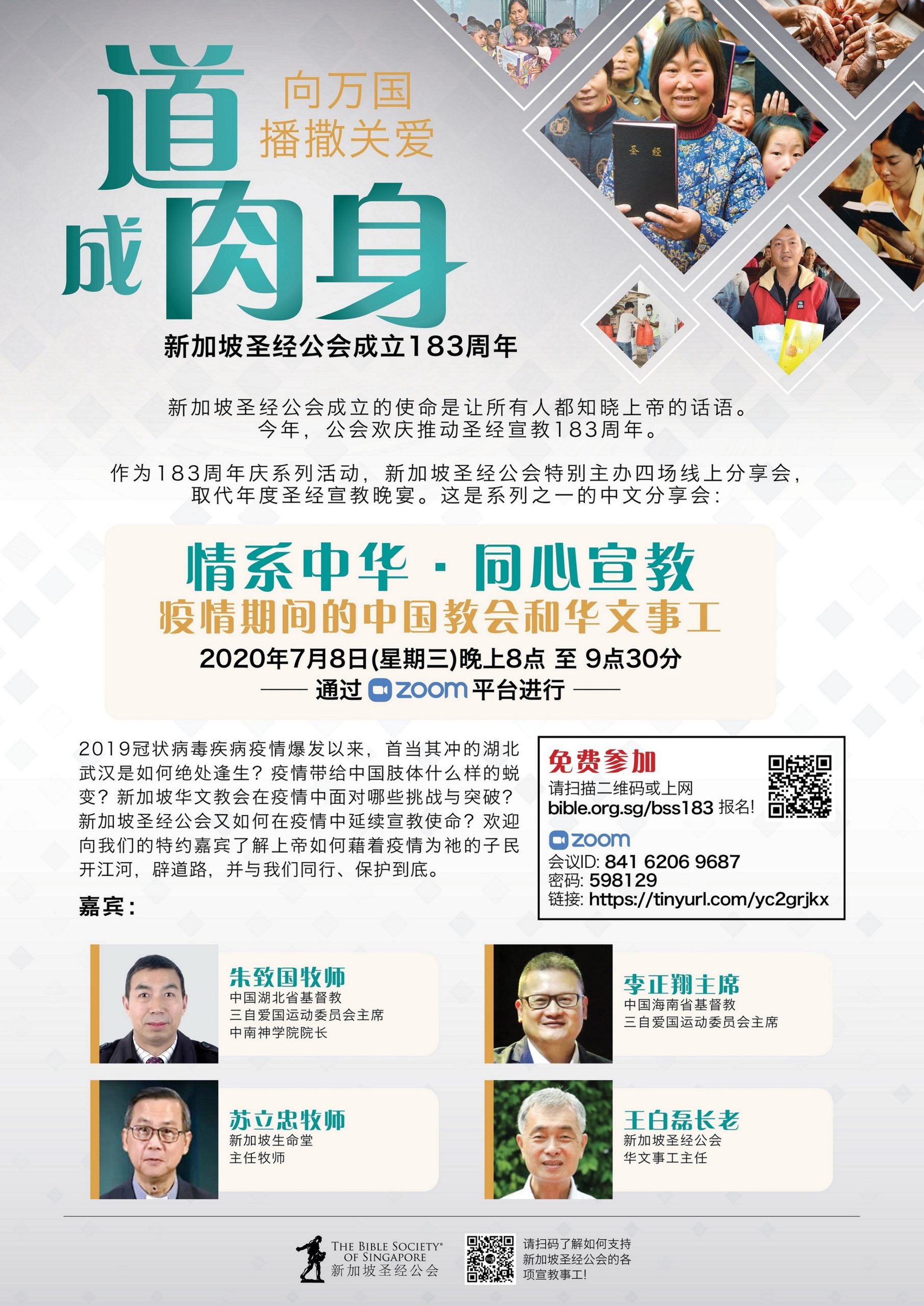 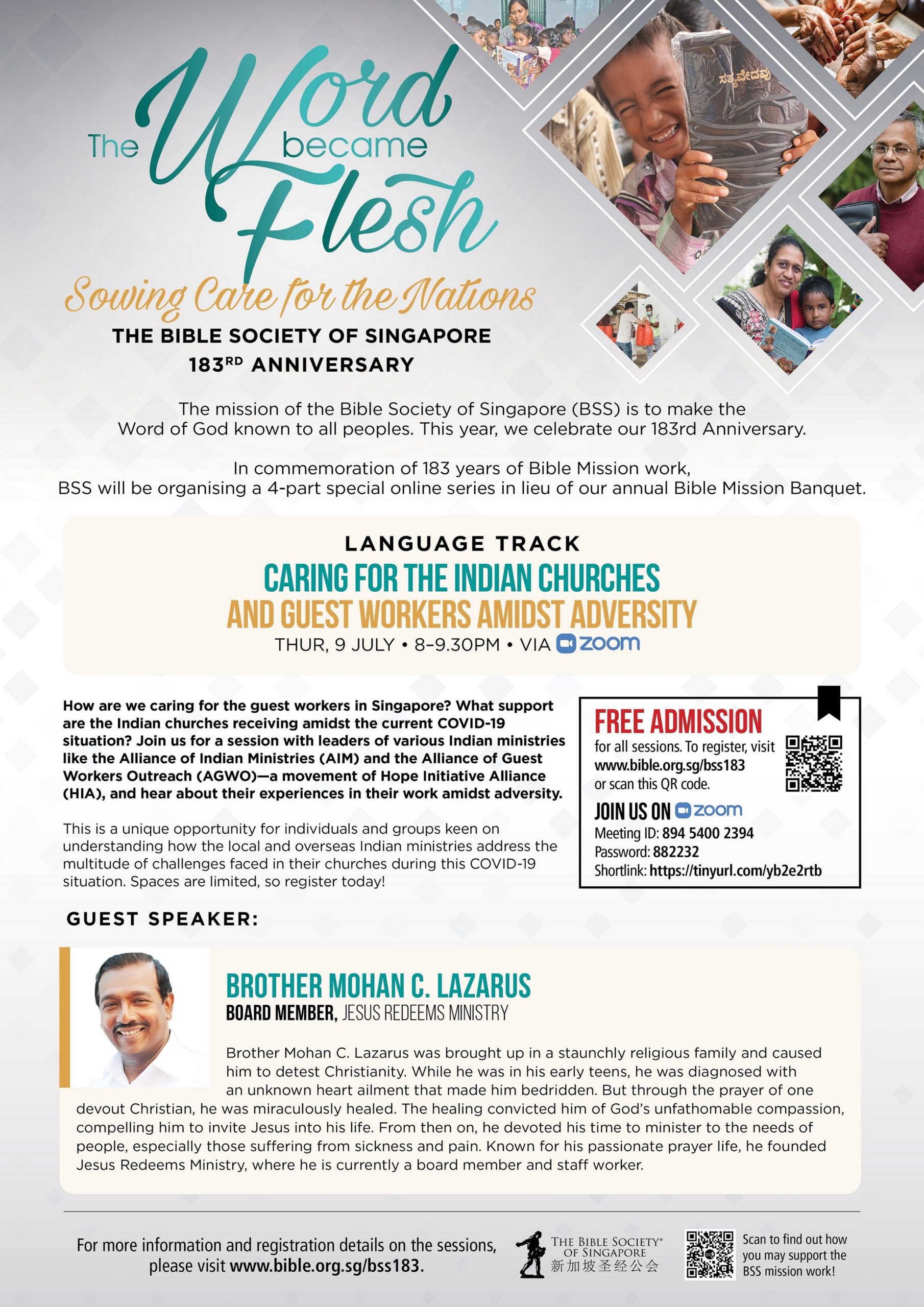 How are we caring for the guest workers in Singapore? What support are the Indian churches receiving amidst the current COVID-19 crisis? Join us for a session with leaders of various Indian ministries like the Alliance of Indian Ministries (AIM) and the Alliance of Guest Workers Outreach (AGWO)—a movement of Hope Initiative Alliance (HIA), and hear about their experiences in their work amidst adversity.

This is a unique opportunity for individuals and groups keen on understanding how the local and overseas Indian ministries address the multitude of challenges faced in their churches during this COVID-19 situation. Spaces are limited, so register today!

Brother Mohan C. Lazarus was brought up in a staunchly religious family and caused him to detest Christianity. While he was in his early teens, he was diagnosed with an unknown heart ailment that made him bedridden. But through the prayer of one devout Christian, he was miraculously healed. The healing convicted him of God’s unfathomable compassion, compelling him to invite Jesus into his life. From then on, he devoted his time to minister to the needs of people, especially those suffering from sickness and pain. Known for his passionate prayer life, he founded Jesus Redeems Ministry, where he is currently a board member and staff worker.

A Multitude of Nations, One Bible Mission
with General Secretaries of National Bible Societies 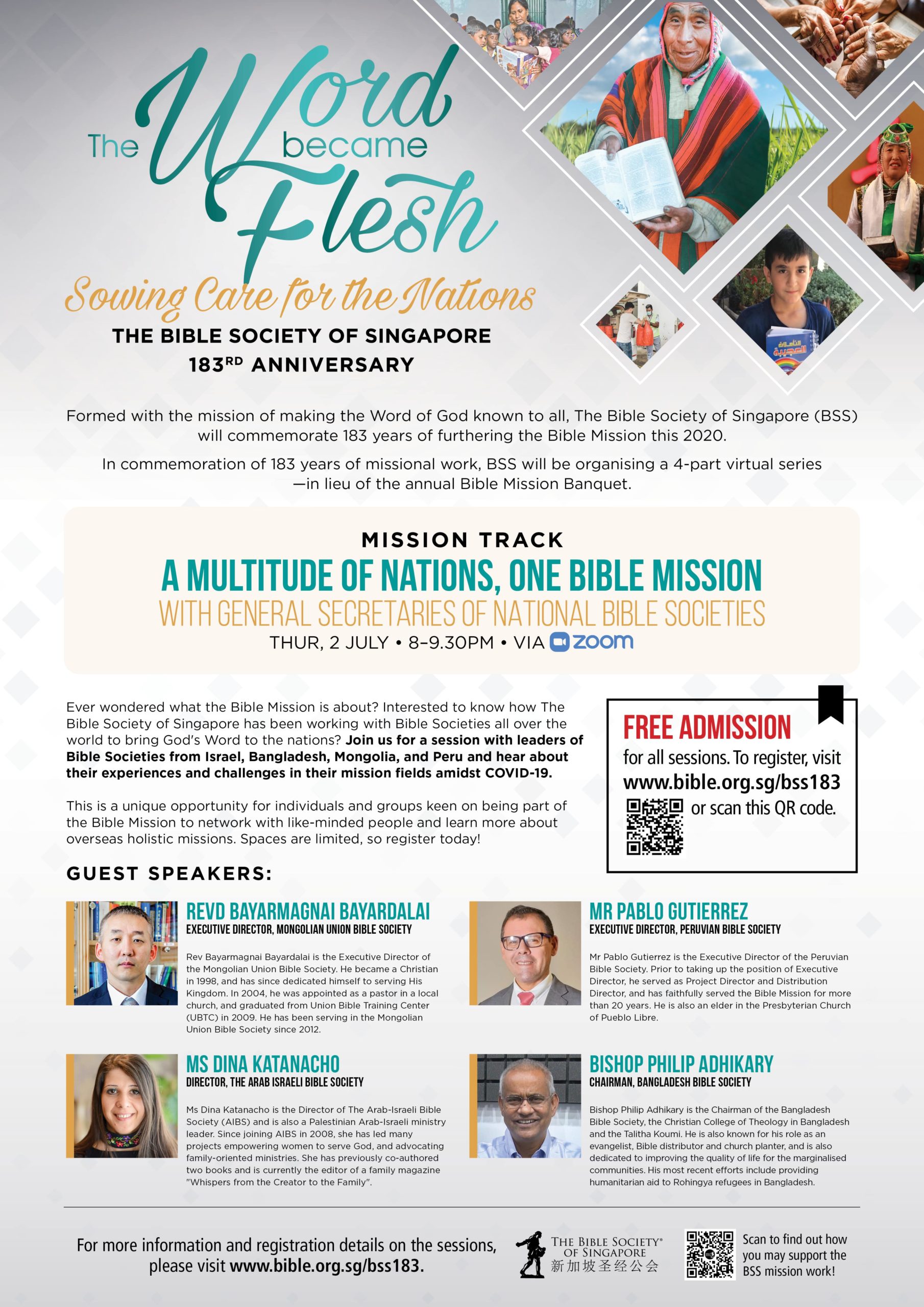 Ever wondered what the Bible Mission is about? Interested to know how The Bible Society of Singapore has been working with Bible Societies all over the world to bring God's Word to the nations? Join us for a session with leaders of Bible Societies from Israel, Bangladesh, Mongolia, and Peru and hear about their experiences and challenges in their mission fields amidst COVID-19.
This is a unique opportunity for individuals and groups keen on being part of the Bible Mission to network with like-minded people and learn more about overseas holistic missions. Spaces are limited, so register today!

Mr Pablo Gutierrez is the Executive Director of the Peruvian Bible Society. Prior to taking up the position of Executive Director, he served as Project Director and Distribution Director, and has faithfully served the Bible Mission for more than 20 years. He is also an elder in the Presbyterian Church of Pueblo Libre.

Ms Dina Katanacho is the Director of The Arab-Israeli Bible Society (AIBS) and is also a Palestinian Arab-Israeli ministry leader. Since joining AIBS in 2008, she has led many projects empowering women to serve God, and advocating family-oriented ministries. She has previously co-authored two books and is currently the editor of a family magazine "Whispers from the Creator to the Family".

Bishop Philip Adhikary is the Chairman of the Bangladesh Bible Society, the Christian College of Theology in Bangladesh and the Talitha Koumi. He is also known for his role as an evangelist, Bible distributor and church planter, and is also dedicated to improving the quality of life for the marginalised communities. His most recent efforts include providing humanitarian aid to Rohingya refugees in Bangladesh. 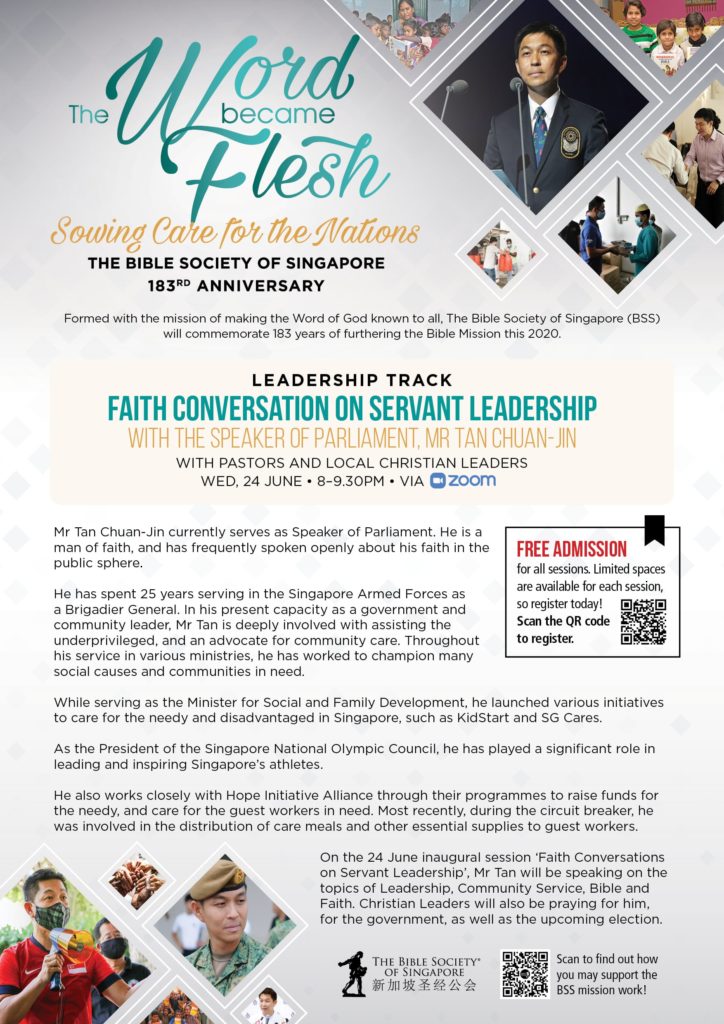 Faith Conversations on Servant Leadership with Mr Tan Chuan-Jin, Pastors and Christian Leaders. Mr Tan Chuan-Jin currently serves as Speaker of Parliament. He is a man of faith, and has frequently spoken openly about his faith in the public sphere.

He has spent 25 years serving in the Singapore Armed Forces as a Brigadier General. In his present capacity as a government and community leader, Mr Tan is deeply involved with assisting the underprivileged, and an advocate for community care. Throughout his service in various ministries, he has worked to champion many social causes and communities in need.

While serving as the Minister for Social and Family Development, he launched various initiatives to care for the needy and disadvantaged in Singapore, such as KidStart and SG Cares.

As the President of the Singapore National Olympic Council, he has played a significant role in leading and inspiring Singapore’s athletes.

He also works closely with Hope Initiative Alliance through their programmes to raise funds for the needy, and care for the guest workers in need. Most recently, during the circuit breaker, he was involved in the distribution of care meals and other essential supplies to guest workers.

On the 24 June inaugural session ‘Faith Conversations on Servant Leadership’, Mr Tan will be speaking on the topics of Leadership, Community Service, Bible and Faith. Christian Leaders will also be praying for him, for the government, as well as the upcoming election.

We want to hear from you!

Have you been touched by the mission work of The Bible Society of Singapore over the years?

Have you joined one of our Bible Missions Trips or Bible Land Tours?

Has your church hosted a Bible Sunday?

Have you attended one of our courses or events?

Have you enjoyed the articles in the Word@Work or on our website?

Has your church or cell group used the Bible House for your worship?

Have you been blessed by anything from our Bible Resource Centre?

You and your community have played such an important role in the Bible Mission and we want to hear YOUR stories! As a token of our appreciation, you'll even receive a special commemorative item!

180 years of the Bible Mission

On 4 July 1837, the Singapore Auxiliary Bible Society was formally established with the aim of serving the needs of the region.

From now until 15 Sep 2016, we will be hosting an Anniversary Celebration Competition. 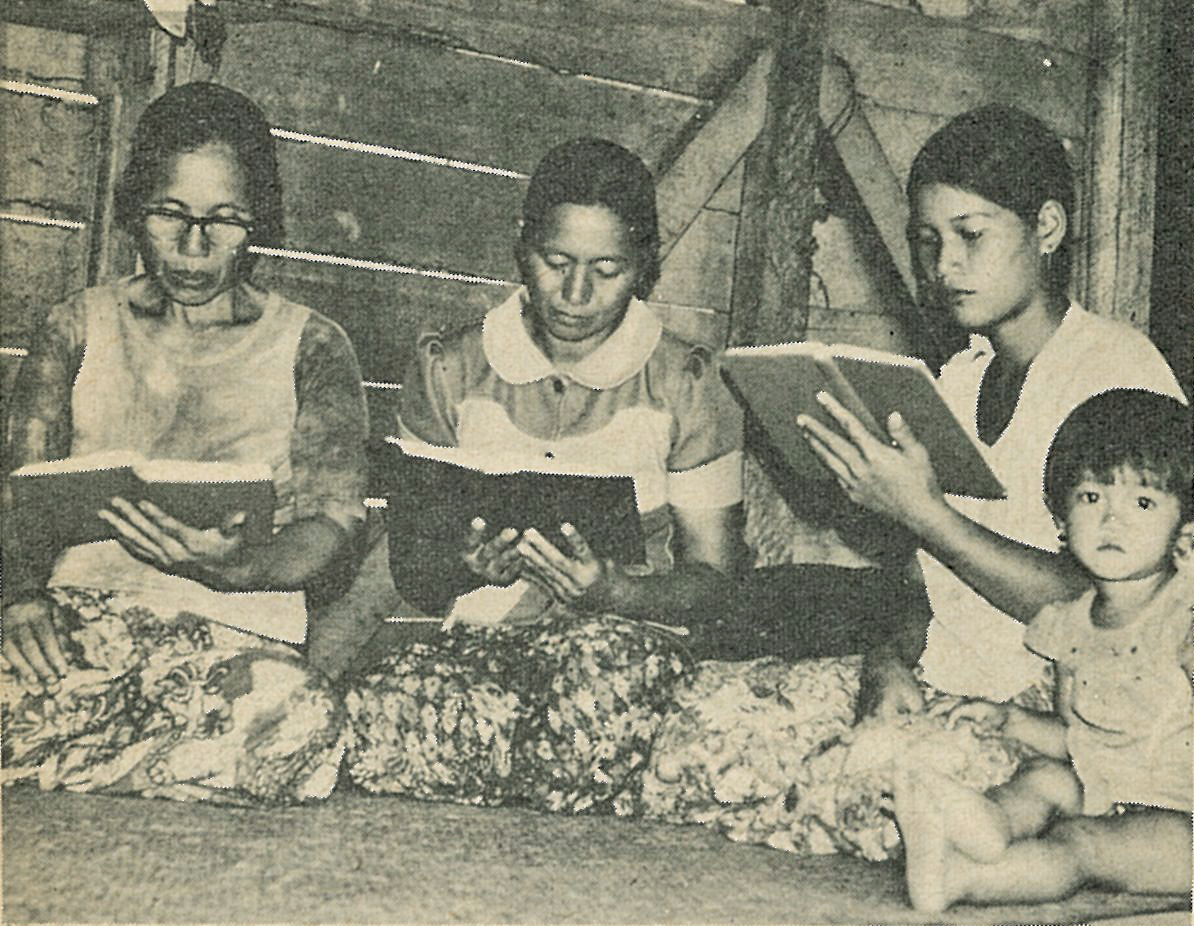 Within Singapore, the Bible Society’s history is intertwined with the early pioneering work in the region – most notably that of Sir Stamford Raffles and Rev Dr Robert Morrison. They were some of the first to realise Singapore’s potential to be a strategic location for missions work in Asia, and it is due to their heart for the Bible Mission that The Bible Society of Singapore exists today. (Read more about their influence here.)

Over the decades, there have been many men, women, churches, and Christian organisations who have taken up this mantle and worked alongside us to further the Bible Mission. This 180th anniversary is more than the accomplishment of one organisation – it is the shared accomplishment of those who have journeyed with us along the way. As our supporters, you have been such an integral part of seeing this milestone come to fruition, and we would like to invite you to join us in commemorating this anniversary.

Celebrate the work of the Bible Mission with your church community!

We invite you and your church to submit a proposal for a churchwide celebration of the Bible Mission. Some examples of these celebration ideas include:

Your involvement in these celebrations is a vital part of our rich history.

If your proposal is chosen, we would like to express our thanks in the following ways: